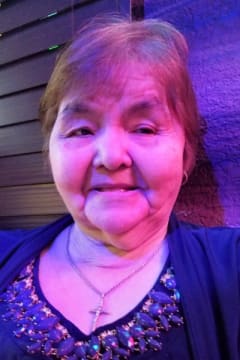 Martha was born on September 8th or the 11th (depending on who you asked), 1945 in Teocuitatlan, Jalisco, Mexico, the fourth of five children, to Maria Refugio and Jose Miranda. She spent most of her life calling Las Vegas home, moving here from Los Angeles, 30 years ago. A devout Catholic, she worshipped at St. Anne Catholic Church for decades, while raising her youngest children and later, several of her grandchildren. On October 15th, 1999, she finally wed her long-time sweetheart, Arthur Farris, who preceded her to Heaven in 2006. She loved watching her family grow, her Coca-Cola, playing Loteria, sneaking her fur-grandbaby, Sophia, human food whenever she got the chance.

She is survived by four children, Martha, Hector, Michelle, and Angie, her baby sister Josefina and Lorena, seven grandchildren, Judy, Lilly, Dina, Luis, Mikaela, Helen, and Felipe, five great-grandchildren, Eric, Sophia, Evalyn, Damien, and Jay and at least 25 nieces and nephews. Her funeral service will be held on Tuesday, January 26th, 2021 at Hites Funeral Home at 11am, followed by reunion with her love at Veterans Memorial Cemetery in Boulder City.

You took my siblings & I like your own. (Judy & Angie are like my sisters) My mom & I will always remember you always making us laugh & taking random trips in LA & Vegas. Rest in paradise Martha, love you!
- Jeannette

May my Tia Martha RIP. She always be remembered as my best aunt. A great lady who loved everyone.
- Sarah curry